also found this old photo of elland gravel pits,taken around 1912. 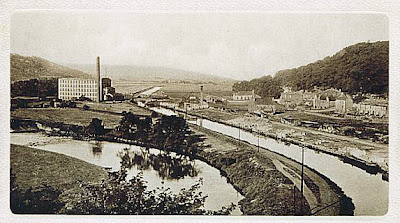 What an interesting photo,I wonder what birds were about in the area in those days. I remember Peregrines always up on the cooling towers but not in 1912 of course, Sedge Warblers were common,as were Lesser Whitethroat,Yellowhammer and Water Rail,the good old days.

my own take having watched the area for now 20 years is, it is now too overgrown for sedgies,their last know 'hotspot' was by the iron bridge and just by the lock keepers shed near the fishing lake.lesser whitethroats were never that common,though i expect some are still present in the very east of the area,the area by the a58 near norwood green still looks good.as for yellowhammer the lowfields area was best but once again building on so called 'brown field' sites has a big affect on finches and buntings with amount of'weeds'

If you look at the photo closely you will see that the factory was Turnwrights Toffee's factory. The area near the bend of the river Calder (Red Beck) in front of the factory was a sports field for the factory. The fields behind the factory on either side of the canal were used to grow peas for many years. The pea field on the right of the canal towpath was flooded and froze over one year and people came from all around the district to use it as a skating rink.The derelict looking area to the right of the canal before the factory was a brick works and many narrowboats used to load bricks on board here to take to Halifax for further transportation around the district for building. Brookfoot itself was a thriving village with many houses, a school and two pubs.

I have a few photos in my possession which show the area of Cromwell Bottom/ Elland Gravelpits. Amongst these is one which shows the area now know as North Bank Loop and Lowfields with the gravel extraction works and no power station yet built. I don't know how many people remember that in the 1970's local birders built a wooden hide to overlook this are of old gravel workings ?

I remember that hide Paul, it was built by the then local RSPB group and overlooked a wetland area that included quite a large reedmace bed which used to attract wintering Snipe (and Jack Snipe if I remember correctly). I remember finding a Black Redstart there with John Beaumont and writing a description in the hide log. Around that time there was an overwinterimng Water Pipit that used to spend a lot of its time just above the wier on the river. Happy days! (or am I just getting old?)

Yes Nick, but do you remember the river steaming away on cold mornings by the power station when the used to pump the cooling liquid directly into the Calder ? This area was a mecca for winter anglers at that time, it was not unusual to see dumped tropical fish swimming happily around the hot water pipe flow ! I dread to think what exotic tweeters around the hot water I missed in those long off days.

Which reminds me; a Amazon parrot has lived the whole year round in Saltaire near Shipley College. Sue works at the college and the staff and students have been feeding it all through the winter and its survived quite happily on scraps

Nick I also remember that water pipit and leeches in the river! Cormorants used to roost on the cooling towers. That hide was built by the local RSPB group, David Crawshaw and myself were members. It was vandalised and eventually removed. Bob Kerrod from Brighouse was the "leader". It must be well over 30 years ago, you must have been about 10 Nick :-)

Do you remember the two Black throated Divers and a Red necked Grebe together on the main lake in the late seventies? part of a big influx into the country due to a Baltic freeze up. Can't remember how many years ago it must be since the main lake froze completely over down there, but I can remember kids playing on the ice right out in the middle.

I do remember the steaming river by the power station and the good numbers of Little Grebes we used to get on that stretch but don't mention Leeches, had a close encounter with one whilst in Nepal!

Going back further in the 60s when I started birding we use to trudge around EGP with the HX Scientific Soc led by Clifford Lees, who used to write a birding article in the Courier, Vernon Crapnell and Mr Murgatroyd. Clifford Lees had a brass telescope which extended about 15ft and it was our job as the youngest to rest it across our shoulders whilst everybody looked through.We hoped one day we would get a look through but it never happened.

Well done with the old photo Darrell. I remeber the hide and a really good wader pond below it - since filled in with landfill unfortunately. I remember the wintering Water Pipit between Jan and Mch 1977 and seeing a Great Grey Shrike flying over the hide, just as I came out of it on 8th Feb 1976. Possibly the same bird on 29th March the same year on Elland Wood bottom

Is that Ken Faucett in the background

I think it is, must be watching a Red Grouse

or a Scandanavian Grebe 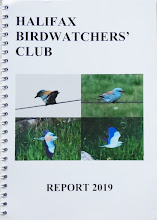