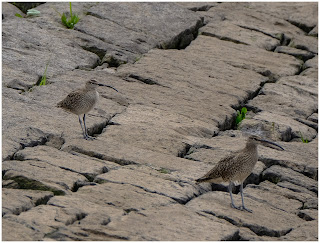 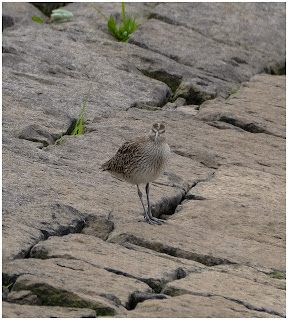 Posted by Dave Franz at 12:43 pm No comments: Links to this post

I thought there was only one, which showed well on a post but at distance.

Its hard to tell from the photo but it was very brown in colour with the sunshine on its back, so I would presume female.


Then, on way back, I flushed another, flying only a short distance before turning to face me, the best views so far. Managed to get a couple of shots off before it flew down to bottom of fields. 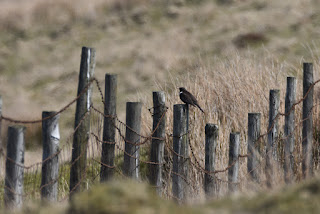 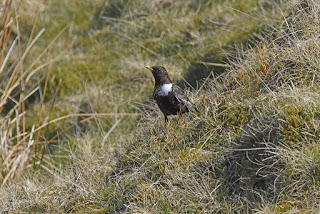 Posted by Phil D at 1:52 pm No comments: Links to this post

I have unearthed a pair of Praktica 7-21x25 zoom bins when moving house. I'm not even sure who gave them me, as I certainly didn't buy them and had forgotten I even had them.

I thought I might leave them in the kitchen to watch our yard feeder when I install it, but I found the rubber armour has gone sticky, and leaves black marks on my hands. Has anybody ever encountered this, and if so, did they find a solution?
Posted by Phil Wood at 10:33 am 1 comment: Links to this post

Again, very heavy crops, taken along the A640 within our recording area, it had a white rump in flight and flew off towards  Dean Head/Scammonden/ Ringstone

I felt I'd seen one before and if I'm correct I'd photographed one over at Thornwick Pool a couple of years back, cheers 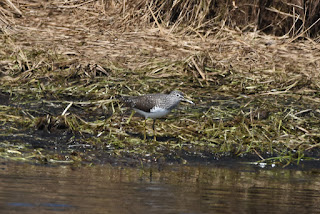 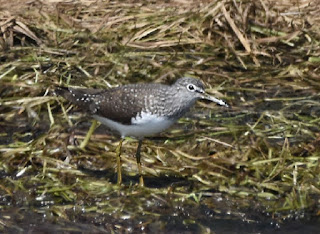 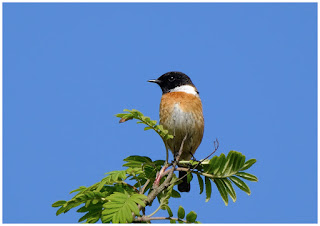 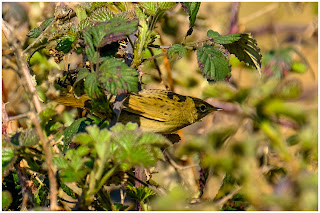 I must be on a roll with the Ring ouzel, 4 there today! flushed from under wall lower down hill. Excellent to see after yesterdays extensive search turned up a blank.

Managed another distant shot of one of the Ring Ouzel, a Lapwing in the hazy sun and an obliging male Wheatear, taken last week, who was quite happy to pose on a nearby post 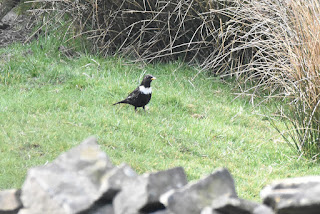 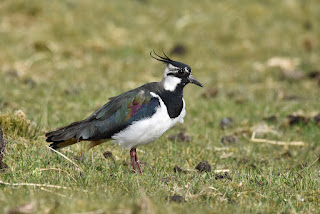 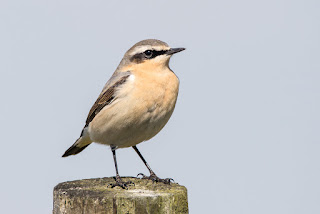 Just a few bits from my recent visits
This morning I was pretty buzzed to stumble across two Ring Ouzel in the small dell on the western side of the hill. Unfortunately the birds flushed from their position and headed round to the hills summit, before flying off in the direction of Ogden. They appeared to drop back in somewhere around Ogden Back Lane, so that area may be worth searching for them. There was also a singing Whitethroat in the same location.
Yesterday there were two Wheatears and two singing Willow Warblers around the Hill, as well as only my second ever Soil Hill Jay
Both Red-legged and Grey Partridges have been around in the past couple of days as well.
Posted by Daniel Branch at 12:43 pm 1 comment: Links to this post

A nice record from PG of a female type Black Redstart in Greenwood Clough this morning. A site just up the road from the top end of Baitings Reservoir. Scarce migrants in Calderdale but always one to look out for in  spring and autumn and even into early winter. usually found around ruined buildings, rocky areas and stone walls as was the case with this individual.
The bird was also seen later in the morning (AC) but a search late afternoon (AH) failed to find the bird but came across 3 Wheatears in the same locality.

3 Wheatears also seen today from the upper end of Crimsworth Dean (NG)  along with lots of Fieldfares moving >N nearby at Lumb Falls.

A nice find earlier in the day for Jacky with a Red Kite, near Cragg Vale. 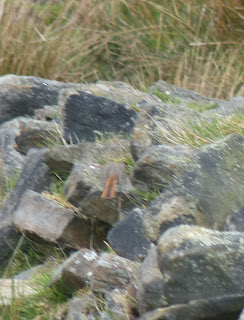 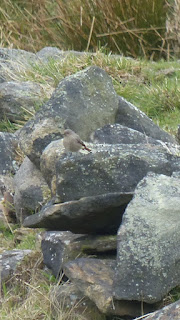 Posted by David Sutcliffe at 7:45 pm No comments: Links to this post

A very heavy crop but as least I managed to get a record shot this time!

The elusive Ring Ouzel at Moselden, seen around 12.30 but couldn't re-locate despite an extensive search by myself, JM, AT, LD.

Same location as the one I saw a couple of weeks ago, same bird maybe or just a coincidence? 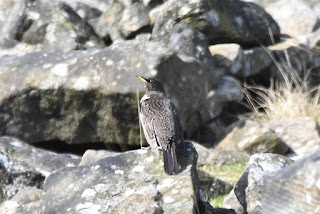 Not easy to keep up with all that has been happening in our local area in the last week or two but will attempt a brief review !!

Today
House Martins, Swallows and Sand Martins reported in the last few days mainly from Cromwell Bottom ski- lake. Occasional sightings of Swallows and Sand Martins from elsewhere but the ski-lake is the favored early stop-off after their long, and probably continuing migration. The weather today concentrated the birds here, a low level lake probably a little more sheltered than many other parts of Calderdale today in the cold windy conditions.

From PJWS a brave attempt at the very exposed Whiteholme Reservoir in today's conditions with rewards of a Common Sandpiper (first one locally for the year) and 2 Ringed Plover. 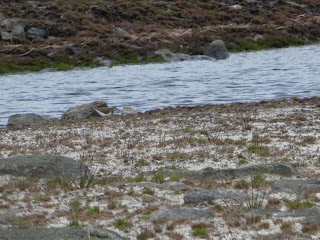 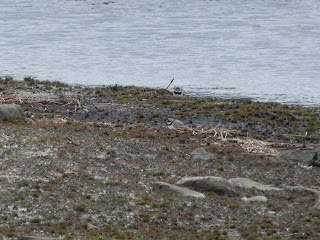 An Osprey over Ringstone Edge Reservoir >N also on Saturday at 16:40 (JB)

A few Wheatears also reported from various locations but no local Ring Ouzels yet since the first one from near Scammonden on 22nd March (PD). Although one was seen near Denholme on Monday 1st April(JJL)

Still a few Bramblings about earlier in the week and the weekend as well as a few Chiffchaffs and a Ring-necked Parakeet in Warley.
Great Crested Grebe from Blackstone Edge Reservoir on 2nd April (PJWS) and another from Cromwell Bottom (AC) and one from Green Withens (DP). Also the latter site with 13 Twite.

I will have missed some reports but perhaps the above gives a flavor of what's been happening locally this week.
It's very encouraging to see so many local observers out in the field in recent times. Keep up the good work everyone !
I would encourage others to continue to post on the blog as well.

Posted by David Sutcliffe at 6:33 pm 2 comments: Links to this post

Withens Head - 5+ Wheatears on the field walls opposite the wind-farm today, mid afternoon. A nice sight to see they are coming back now, but as in recent years they all move on further north to return in the autumn. Hopefully we will be fortunate if any stay to breed.

Crimsworth Dean (upper)
At least 2 more Wheatears  though I arrived just after a heavy shower and there were Meadow Pipits all over the place, probably just passing over when the downpour came and they grounded for a while. They soon dispersed or continued their journey as the weather brightened.
Plenty of noise from the waders, with Curlew, Lapwing, Oystercatchers very vocal and  a few Golden Plover. No sign of any Ring Ouzels - my target bird for the afternoon !

A few Kestrels about, 6+ Pied Wagtails, 10+ Stock Doves, 2 Woodpigeons and 2 Jackdaws.
Little Owl calling continuously but I couldn't find it.! 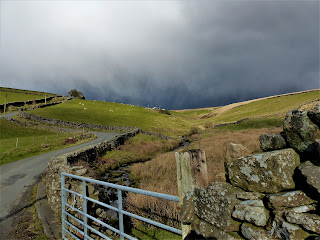 Storm clouds gathering, and then it snowed and hailed with a vengeance - briefly !
Posted by David Sutcliffe at 9:19 pm No comments: Links to this post 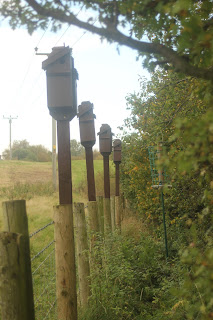 Several years ago the Jayhouse Lane Tree Sparrow Project was launched by The Calderdale Bird Conservation Group. A number of nest boxes were installed and Sean Grey monitored the boxes and ringed both the adults and chicks. This is a tiny population and the only known breeding site in Calderdale.

When Sean left for pastures new I took over the project and for several years I have been fitting both BTO rings and colour rings to the chicks. 2018 was the most successful breeding season, even so only 36 fledglings were ringed. Tree Sparrows are hanging on by a thread in Calderdale.

It is very sad that I have to report that 8 of the Tree Sparrow boxes on Jayhouse Lane and two feeders have been stolen. The total value of the items stolen is around £300. This was not an opportunist crime. Whoever stole the boxes needed both a ladder and a cordless drill to remove the boxes from the poles on which they were mounted. All crimes are despicable but the theft of these next boxes was an attack on our natural environment and the species that we are working hard to protect.

I have reported the incident to the Police and the Project will continue, despite this set back.
Posted by Steve Downing at 8:00 pm 4 comments: Links to this post

A nice surprise late morning with a single Swallow. I don't think it stayed long though, I couldn't re-find it later on.
1 Shelduck also dropped in and still there when I left at 11:30
6 Tufted Duck
8 Canada Geese
4 Common Gulls
1 Herring Gull
2 Ravens very high >SE

Sent from my iPhone
Posted by David Sutcliffe at 12:11 pm 3 comments: Links to this post

First swallow of the year

As far as I know this is the first reported swallow this year - Cromwell Bottom on the  31st March , 1pm-ish
Posted by Aziza Mills at 8:15 am 1 comment: Links to this post 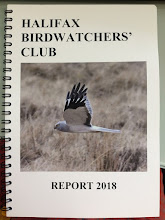 Copies are available at £5.50 each from the GO local store at Woodlesford, Pellon price . Hopefully they will also be available at the Fox and Goose Hebden Bridge ,